White Paper on Blockchain in Logistics/Transportation

Blockchain is nothing but a distributed database, wherein the storage devices for the database is not all connected to a common processor.  It maintains a growing list of ordered records, called blocks. Each block has a timestamp and a link to a previous block. Cryptography ensures that users can only edit the parts of the blockchain that they “own” by possessing the private keys necessary to write to the file. At its core, Blockchain is a shared digital ledger encompassing a list of connected blocks stored on a decentralized distributed network that is secured through cryptography. Each block contains encrypted information and hashed pointers to a previous block, making it difficult to retroactively alter without modifying the entire chain and the replicas within the peer network

It also ensures that everyone’s copy of the distributed blockchain is kept in synch. By using a blockchain system, bitcoin was the first digital currency to solve the double spending problem (unlike physical coins or tokens, electronic files can be duplicated and spent twice) without the use of an authoritative body or central server. The security is built into a blockchain system through the distributed timestamping server and peer-to-peer network, and the result is a database that is managed autonomously in a decentralized way.  This makes blockchains excellent for recording events — like medical records — transactions, identity management, and proving provenance. A blockchain allows anyone to send value anywhere in the world where the blockchain file can be accessed. But you must have a private, cryptographically created key to access only the blocks you “own.” 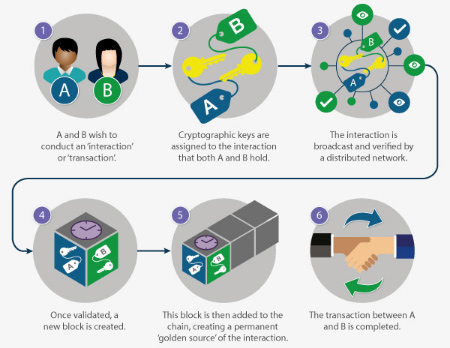 By giving a private key which you own to someone else, you effectively transfer the value of whatever is stored in that section of the blockchain. 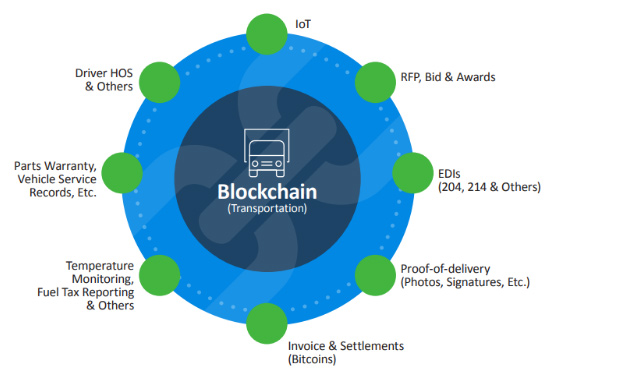 This technology is unfortunately misunderstood as Crypto Currency since most of them use Blockchain. Blockchain technology in transportation management improves effectiveness because of the technology’s capability and chronological elements. The security of blockchain procedures can reduce data entry errors and protect against data corruption, leaks, and breaches. And the chronological elements help with security, logging every time and place an asset changes. A company can look at that information to trim costs, using it to isolate where and when assets spoil or get lost.

Global giants in the food business, such as Nestle, Unilever, and Dole, normally competitors, are coming together with Walmart to form a standard of using blockchain to ensure food safety. . . . This has obvious implications for food safety—when salmonella or other contaminants are discovered in an item . . . it would be simple to discover from where those items came and to which stores those items were sold, generating potential cost savings. Applying the blockchain to food safety could protect the public from foodborne illnesses too.

Tracking in-transit freight isn’t new; organizations have been using GPS technology to track freight-hauling assets for multiple decades. Historically, location updates were provided by check calls and the use of fax machines. Later, they were replaced with automated systems such as EDIs and APIs. Yet, as the industry faces ever-rising customer expectations and retailers increasingly promise same-day or even one-hour delivery services, traditional methodologies won’t scale. We feel the next wave of innovation will come through Blockchain, which not only addresses the newer requirements but also existing authenticity issues.

Blockchain technology will prevent lost shipments. “The idea of information always being repeated and verified, prevents errors from occurring. I think we’re on the verge of seeing fewer errors and a lot more organization inside a lot of major shipping companies.”

Blockchain technology can create a ‘digitized roadmap’ of routes, and smart contracts written into the blockchain can trigger the transfer of funds to a driver instantaneously once a delivery has been completed.” The capability would result in streamlined payments and new performance standards for drivers and shipments.

One of the leading concerns associated with load boards is trusting the data itself. In many cases, load board data is outdated and inauthentic. When a shipper works with a set of freight brokers to transport goods, that information is typically entered in multiple load boards, causing data duplication and inaccurate demand forecasts. For this reason, the use of load boards has been discouraged by many organizations.

We believe data authenticity problems associated with load boards can be addressed by implementing a Blockchain in the heart of this business model. For example, when a shipper posts a load in the Blockchain, it would be timestamped with key information.

In the Blockchain scenario, when Broker A attempts to post a load in a load board, the technology first checks to see if the load already exists by comparing the timestamped information. If Broker B attempts to post the same load, the load board would identify it as a duplicate and alert the user. This can ensure that each load board will only have one record for a given load. Another advantage to this model is that it also addresses the issue of outdated information: When a load is taken by a carrier and updated in the Blockchain, all load boards will reflect the updated status.

Blockchain and Internet of Things (IOT)

Internet of Things (IoT) is a popular topic in many industries. According to Cisco, there will be 50 billion connected devices by 2020. With the continued proliferation of connected devices and associated data, securely storing that data will always be a challenge. IoT, together with Blockchain, can help solve the issue of core data capture and security. Moreover, IoT alone has become less of an advantage in today’s world of technology; it needs to be coupled with a system such as Blockchain to provide significant competitive advantage.

From a transportation perspective, there are several applications that could benefit from the marriage of IoT and Blockchain. In terms of telematics, it would enable manufacturers to add more sensors to help service centers securely capture and store engine diagnostics data and other vehicle performance information. This information can be used with machine-learning algorithms to determine when a vehicle will require maintenance. The role of Blockchain in this example is to provide decentralized data storage, eliminate a single point of failure, provide a tamper-proof record and enable smart devices to autonomously communicate with one another.

Similarly, the combination of IoT and Blockchain can be used to ensure safe delivery of perishable food products by controlling the temperature throughout the transportation process. It also can be used to automate order fulfillment, invoicing and settlements using smart contracts. Each of these capabilities makes Blockchain an ideal component of an IoT solution.

Let’s look at Blockchain from a different perspective, exploring its potential application beyond operational needs. Thus far, we have focused on the use of Blockchain to capture and store data. Yet, if the technology can store all pieces of information in a single place, it could also very well serve as a Master Data Management (MDM) system. If it were implemented as the core system, with access to key information such as:

then Blockchain becomes the perfect solution for building a data lake for MDM. Because it inherently supports data validation by network members, Blockchain could provide the function of “data stewards” in an MDM solution. A key difference—in fact, an advantage—is that the data validation process is much more refined in the Blockchain model since it would provide cryptocurrency incentives to members who provide this value. This model would also encourage research by providing all pertinent data in a single location. The decentralized phenomenon allows each business entity to have a node in the local network, providing easier integration to the single version of truth while protecting sensitive information via cryptography. All of the above make Blockchain a perfect framework for building a data lake for MDM.

Blockchain technology can have a significant, positive impact on modern supply chain processes, and particularly in the transportation category. Its abilities are virtually limitless. But a successful implementation of Blockchain requires a strong partnership with a technology provider that understands its intricacies and potential applications. Building a Blockchain system that provides high availability, performance and security services is a challenge. It requires extensive planning and design.

IT Dependance or Addiction